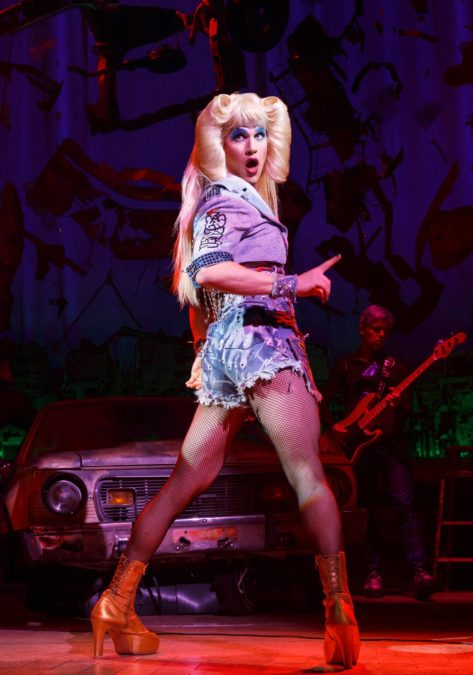 Come on, Sugar Daddy, bring it home! Two-time Broadway.com Audience Choice Award winner Darren Criss will launch the national tour of Hedwig and the Angry Inch this fall. Featuring a book by original star John Cameron Mitchell and a score by Stephen Trask, the touring production of Hedwig will kick off at San Francisco's SHN Golden Gate Theatre on October 4, where it'll run through October 30. The show will then move to the Hollywood Pantages Theatre in Los Angeles from November 1 through 27. Following San Francisco and Los Angeles with Criss, the tour will subsequently continue across North America.

The members of Hedwig’s band “The Angry Inch”—aka “Tits of Clay”—will be music director Justin Craig (guitar and keyboards), Matt Duncan (bass), Tim Mislock (guitar) and Peter Yanowitz (drums), all of whom originated their roles on Broadway. Additional casting will be announced soon.

Criss played Hedwig on Broadway for 12 weeks in 2015 and earned the Broadway.com Audience Choice Award for Favorite Replacement. He made his Great White Way debut in 2012 as J. Pierpont Finch in How to Succeed in Business Without Really Trying, a role that earned him his first Broadway.com Audience Choice Award for Favorite Replacement. Perhaps best known for playing Blaine on the Fox series Glee, Criss' additional film and TV credits include Girl Most Likely, Eastwick and Little White Lie.

“When I found out that the tour would be kicking off in my hometown of San Francisco—the city where I was introduced to Hedwig and the Angry Inch—I could think of no better excuse to get back into the heels of a character I loved and missed so very much," Criss said in a statement. “And since Los Angeles has become a second home for me, I relished the idea of seeing what kind of fun Hedwig would bring to the heart of Hollywood. Getting to share this fantastic Broadway production with the two great Californian cities of my own life story will hopefully be as much of a joy for me as it will be for audiences who will experience Hedwig’s life story on the West Coast!”

Directed by Michael Mayer, Hedwig and the Angry Inch tells the story of a fictional rock ‘n’ roll band, fronted by Hedwig, a transgender woman from communist East Berlin. Between rock songs, Hedwig regales the audience with both humorous and painful stories about her life, including her botched sex change operation. Trask’s score features “Tear Me Down,” “Wig in a Box,” “Wicked Little Town,” "The Origin of Love," “Angry Inch” and more.

The 2014 Broadway revival of Hedwig ran for over 500 performances and won four Tony Awards, including Best Musical Revival. Over the course of its run, the role of Hedwig was also played by Neil Patrick Harris, who won the Best Actor in a Musical Tony Award for his performance, Andrew Rannells, Michael C. Hall, Taye Diggs and creator Mitchell.