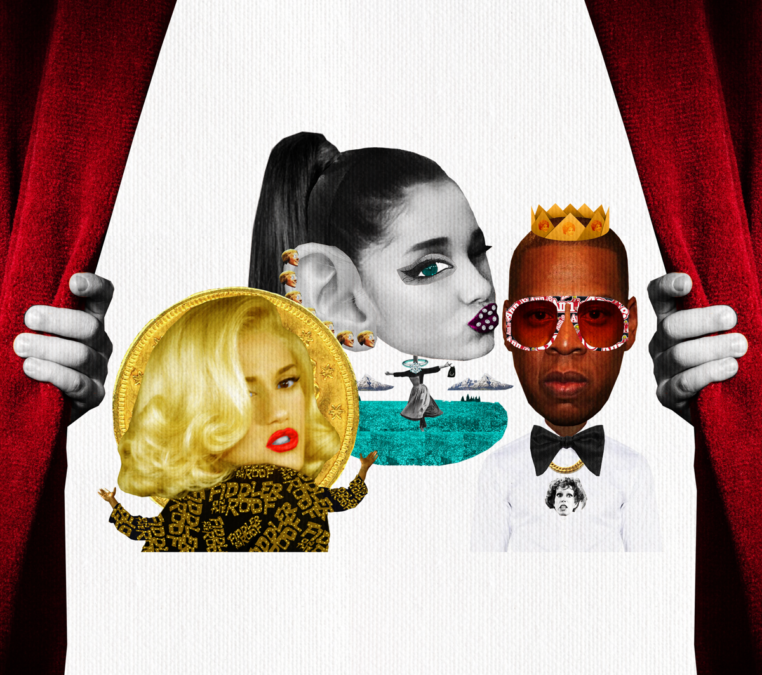 This is a GREAT new music Friday for Broadway fans, and we're not just talking about the awesome "Seasons of Love" track release from Fox's forthcoming live broadcast on January 27. Within the first 15 seconds of chart-topper (and Broadway alumna) Ariana Grande's latest single "7 Rings," theater lovers will recall a beloved musical theater tune. The song nods its head to "My Favorite Things" from The Sound of Music before the beat drops into a hip-hop swirl of what's on Grande's luxury list. Naturally, this got us thinking about other popular music that pays homage to Broadway musicals. Give our list of faves a look (and a listen!) below.

"7 Rings" by Ariana Grande | "My Favorite Things" from The Sound of Music
What's more deluxe than cream-colored ponies and crisp apple strudels? Breakfast at Tiffany's and bottles of bubbles—duh!

"Hard Knock Life (Ghetto Anthem)" by Jay-Z | "It's a Hard Knock Life" from Annie
And here we thought "Easy Street" was the greatest bop to come out of Annie! Leave it to rap game king Jay-Z to turn this classic into a totally original rags-to-riches anthem.

"Popular Song" by Mika ft. Ariana Grande | "Popular" from Wicked
Can Glinda, Mika and Ariana Grande all come and go by bubble? Maybe not! But you can't deny that these three know all about popular. Laaaaa laaaaaa, la laaaaa!

"Doin' Time" by Sublime | "Summertime" from Porgy and Bess
Sublime's breezy jam sounds as relaxing as warm sand between your toes. It calms us almost as much as Audra McDonald and Nikki Renée Daniels' heavenly vocals.

"Anything" by Jay-Z | "I'd Do Anything" from Oliver!
Jay-Z comes in hot once again with a sampling of a musical theater deep cut. We're glad to know Blue Ivy, Rumi and Sir Carter will be well-versed in musical theater geekdom.

"Rich Girl" by Gwen Stefani | "If I Were a Rich Man" from Fiddler on the Roof
This is Stefani's take on Jerry Bock and Sheldon Harnick's Tevye jam. Annnd now we can't stop thinking about Katrina Lenk covering "Rich Girl." As Moxy Phinx. Pretty please?

"The Morning" by Raekwon, Pusha T, Common and 2 Chainz ft. Kid Cudi, Cyhi Da Prynce and D'Ban | "Get Me to the Church on Time" from My Fair Lady
Fun fact: "The Morning" includes uncredited vocals from Kanye West, and we already know he has "so much appreciation" for Broadway.

"Loving You" by Trey Songz ft. Ty Dolla $ign | "Seasons of Love" from Rent
Some things just go together: Roger and Mimi, Collins and Angel, Joanne and Maureen and this catchy collab between Trey Songs and Ty Dolla $ign (and Jonathan Larson!).

Enjoy the full playlist (with the exception of Childish Gambino's "So Much Better"—we've got you covered with this link) below!