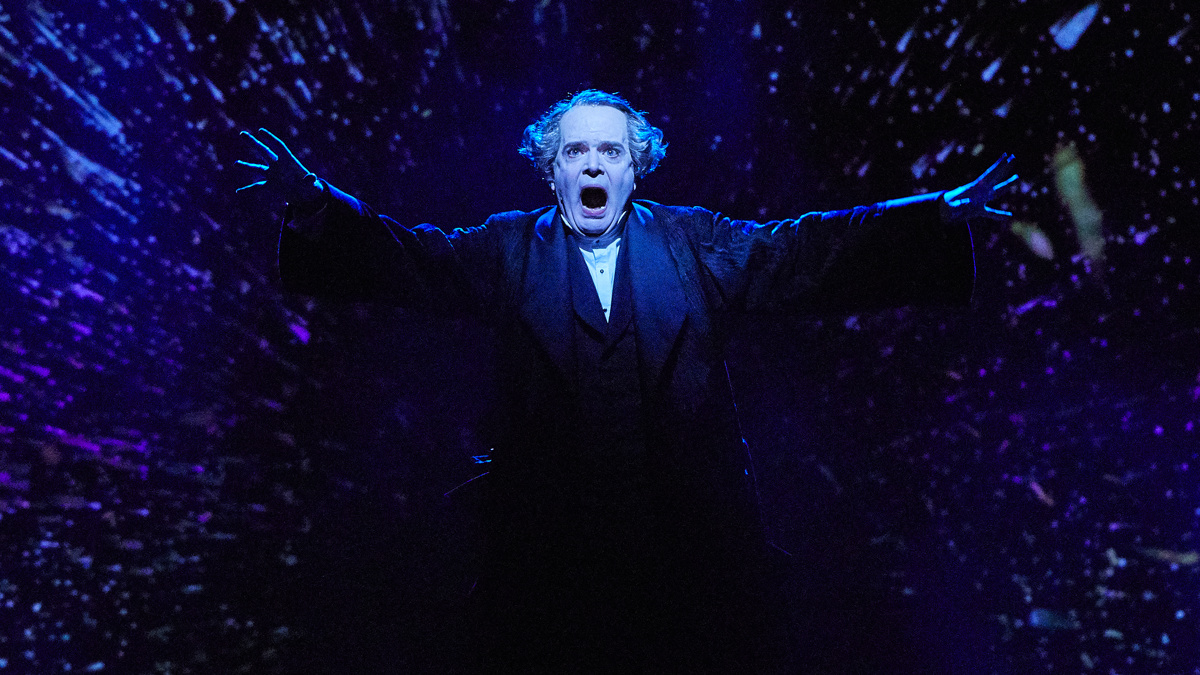 Jefferson Mays on His One-Man A Christmas Carol: ‘I Haunt Myself for an Hour and a Half’

Theater fans have Charles Dickens to thank for the gift of Jefferson Mays. “A Christmas Carol was not only my introduction to this great piece of literature,” the Tony winner said, “it was also my introduction to the theater. I remember staying up late on Christmas Eve as a child, counting my pennies and playing Scrooge. I’ve always been drawn to him.” Mays, who was last seen on Broadway in Oslo and is scheduled to play Mayor Shinn in the upcoming Music Man revival, is revisiting his favorite childhood holiday tale. A Christmas Carol, a special streaming video event, will be available beginning on November 28.

Based on the acclaimed Geffen Playhouse production from 2018 and directed by Michael Arden, this new adaptation was written by Mays, Arden and Susan Lyons and conceived by Arden and Dane Laffrey. Mays’ performance—in which he plays over 50 roles—was filmed this fall at New York’s United Palace and will benefit partner theaters all across the country that have been affected by the COVID-19 pandemic. Over 60 community and regional theaters have partnered with the film. Here, Broadway.com Editor-in-Chief Paul Wontorek checked in with Mays about the project and playing even more characters than he did in Doug Wright’s I Am My Own Wife, for which Mays won the 2004 Best Lead Actor in a Play Tony Award for playing over 40 characters.

“It’s a project that’s been in the back of my mind. I talked about it with my dear wife, Susan Lyons,” Mays said. “We sat down and started tinkering with the text and drew from Dickens’ own performance version: he toured it around as a one-man show.” A Christmas Carol inspired Mays even at a young age. “My father would read A Christmas Carol in its entirety every year,” he said. “Over the course of three hours, he kept us transfixed on the sofa. My mother would embody every character. I remember as a child seeing this woman, who was so familiar to me, transmogrify before my eyes. It was magic. I think it was a seminal moment for me in many ways.”

Arden shares the same affection for the story. According to Mays, his director played Tiny Tim at the age of 10: “He’s always loved the story and connected to adaptations of the story. It was one of those happy events, in which people come together sharing a love of the material—and off we ran.”

With Mays playing all of the roles in a darker tone than other incarnations, this is a unique retelling of the holiday classic. Arden and Mays have chosen to investigate the ghost story aspect of it. “This version preserves so much of Dickens’ narration, and since it’s one person telling it, I haunt myself for an hour and a half. It’s a psychological portrait of Scrooge.”

While it’s fun to spook audiences with this Christmas Carol—Mays said Arden’s goal was to have the audience scream within the first five seconds—the project also holds sentimental value for the stage and screen star: “My beloved parents are alive in this. I hear their voices [when I perform it], and I’ve stolen line readings from my mother and father. It’s kind of like being on stage with them. It’s an emotional event for me.”

Though audiences can enjoy the show online through January 3, 2021, it is Mays’ wish to reprise the role live when it is safe to do so. “I am just dreaming of it—to do this in front of an audience full of people. That singular sensation—I pray that’ll happen soon,” he said.

All the same, Mays is thankful for the experience of filming the show at United Palace—even over the course of six “breakneck” days. “We’ve created this curious hybrid. I guess that’s one good thing to come out of the pandemic, we are exploring. We are transforming the arts of theater and film, trying to get them to meet each other halfway,” he said. “To be reminded of the possibility of change and redemption in these trying times—this is a story that can speak to us and comfort us.”

A Christmas Carol streams from November 28 through January 3, 2021. Get tickets.