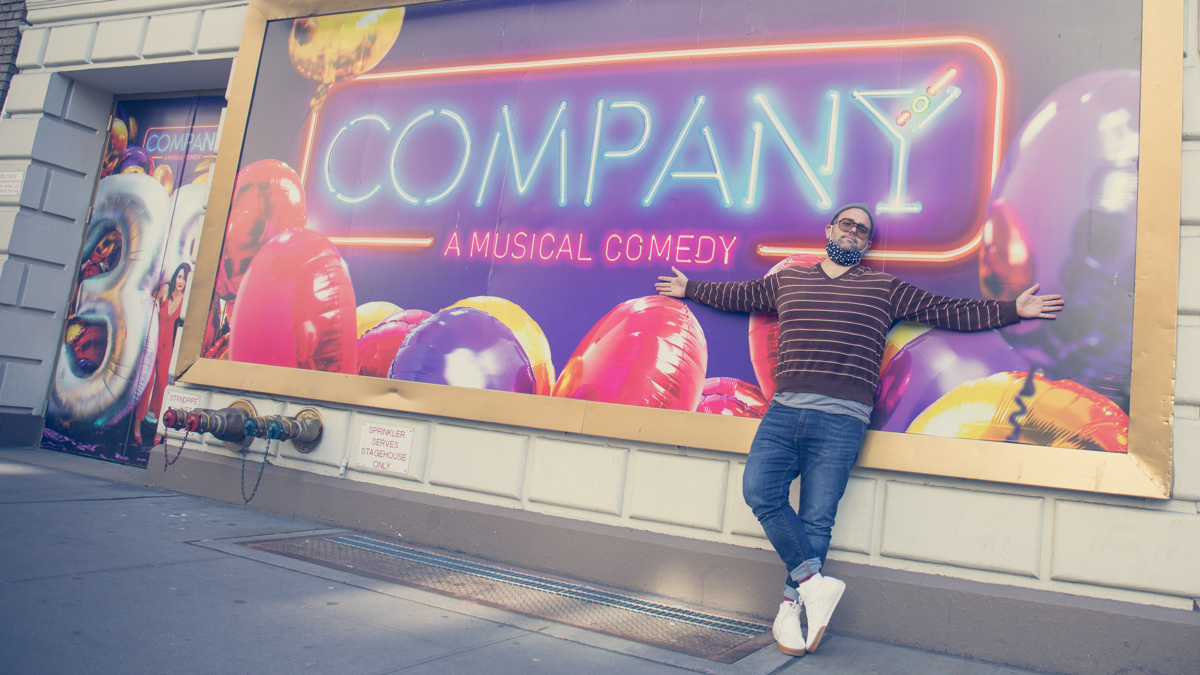 We’ll Drink to That! Company‘s Greg Hildreth Likens 2020 to Riding a Mechanical Bull

Living near the theater district during the Broadway shutdown, photographer and performer Matthew Stocke has been haunted walking past the empty palaces sitting in repose, waiting for the lights and stars to return. In this new Broadway.com photo feature, he reunites members of the theater community with their Broadway home #AwayFromHome.

After concluding a run in Disney’s Frozen on Broadway last year, Greg Hildreth had plans to appear in Moscow Moscow Moscow Moscow Moscow Moscow. From there, he would head back to Broadway in The Rose Tattoo, starring Oscar winner Marisa Tomei. At the time of the Broadway shutdown, he was days away from opening night of the eagerly anticipated revival of Company. Here, Hildreth recounts his last drop-in to Patti LuPone‘s dressing room and shares what he misses most about the “merry band of freaks” that make up the theater community.

“I think so many of us move to the city or pursue the arts because growing up, we felt like a kid from Mars. The thing that really made me want to pursue acting was the sense of community. I belonged to a children’s theater company when I was growing up. The very first production I ever did was Fiddler on the Roof. I was in the ensemble—there’s a photo of me that exists at my parents’ house singing ‘To Life’—a very tiny, drunk child. I remember being involved in a community theater production of Joseph and the Amazing Technicolor Dreamcoat, where I was like, ‘This merry band of freaks: oh my gosh. They’re here. They’ve been here the whole time. They’ve been waiting for me.’…I grew up wearing out the Company vinyl as a kid: I had giant headphones on in my room and would sing ‘Being Alive,’ thinking I knew what it meant. I remember walking out the evening before [the shutdown] and popping my head in Patti’s dressing room. I was like, ‘Hey kid. See ya in two weeks.’ I was joking. She was like, ‘You shut your mouth.’ They called it the next day. At the time, two weeks felt like a really long time. We had been working really long days and were on the verge of opening on Stephen Sondheim’s 90th birthday [on March 21]. It was all momentous. The ball was very much rolling—to pause for two weeks felt insane. Who would have known?…It feels like those marquees in Midtown are all kind of looking back and forth down the street like, ‘Where is everybody?’ The most challenging thing for me is the sitting still. After I left Frozen, I was really keen to manufacture this excellent departure of ‘What am I going to do next?’ Ironically, I had lined up these three shows in a row. I was like, ‘Cool, I’m going to do a Chekhov adaptation. Then I’m going to do a Tennessee Williams play on Broadway. Then I’m going to do a Stephen Sondheim revival.’ It is not lost on me how rare that is—of course, a global pandemic would happen this year. Now, I’m forced to be with myself. It’s kind of like riding a mechanical bull—there are sometimes where I am killing it, and times where I feel like I am absolutely on my ass on some foam padding…I think everybody in their job goes through certain points where they question whether or not that’s the thing they want to be doing. Stepping away has made me feel like, ‘Oh, I love this. This is absolutely what I must be doing.’ I really miss being able to process aspects of myself through art. I need to do that ritual eight times a week to process my own life and my place in the world. I have had the daydream of that first curtain call back. That is something I am very much looking forward to.”