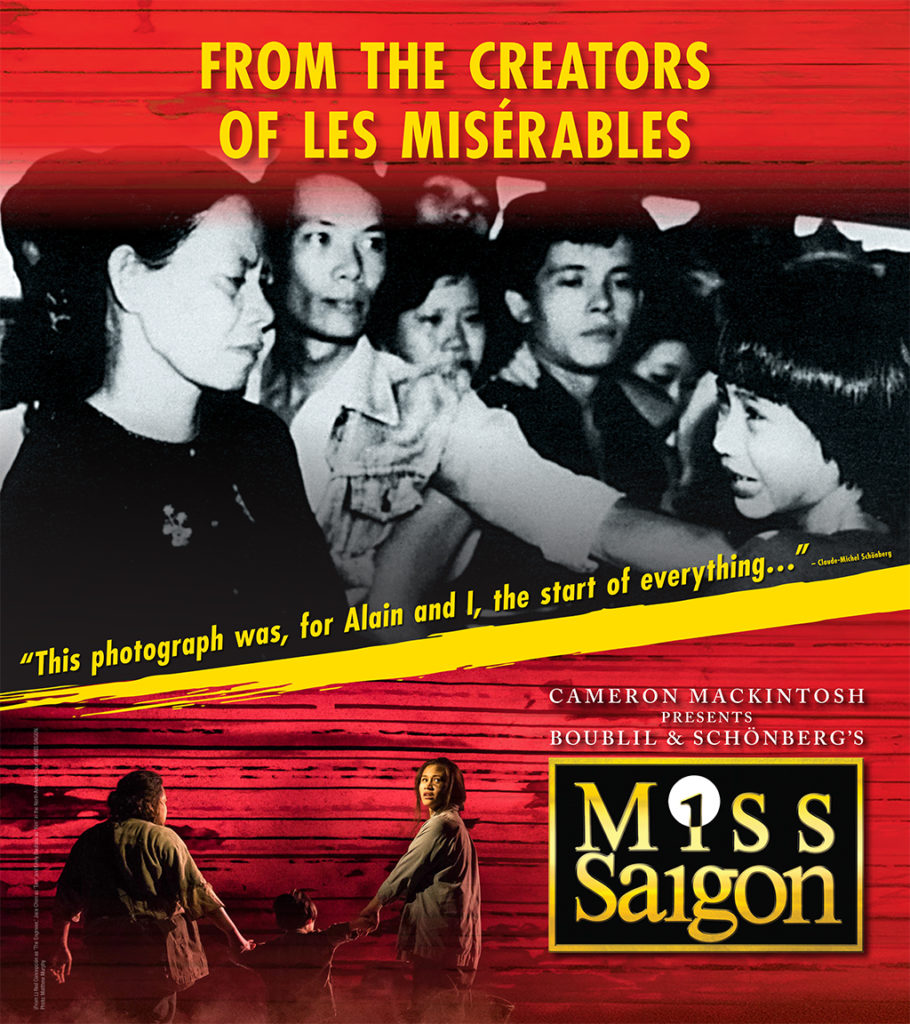 The composer of Miss Saigon, Claude-Michel Schönberg, traces his inspiration for the development of the musical to a 1975 photograph he found of a Vietnamese mother seeing her 11-year-old daughter off at Tan Son Nhut Air Base – the Republic of Vietnam Air Force facility that was located near the city of Saigon in southern Vietnam from 1955-1975. In the photo, the daughter, who is both Vietnamese and American, is being sent to live with her ex-GI father. This is, for the mother, an ultimate sacrifice: to send her child away to America in order to give the child a better life. This picture also motivated lyricist Alain Boublil to further investigate the last days and aftermath of the Vietnam War, an investigation which informed him of the war’s cruelty, contradictions, sacrifice, and betrayal.

“The pain of being torn apart and the fracture of the maternal bond must always be a presence in the depths of this woman’s heart. What we felt for this girl and her mother has always moved us deeply, both as fathers and as the children we once were. This Vietnamese woman, her face frozen in pain, knew that finding the child’s father marked the end of her life with her daughter, and that this moment at the departure gate was the end. This silent scream is the most potent condemnation of the horror of that war – of all wars. This photo could have been taken today in Syria, Sudan and probably in the Ukraine. We hope that such a picture will never be taken here.

Where is she? We hope she found happiness somewhere in America and especially that her mother’s sacrifice was not in vain. Or…maybe they met again, against all odds, maybe the father had not met an Ellen, maybe he went to look for her and found her, MAYBE – like the new song in this new version of MISS SAIGON. Maybe she kept faith in her story like Cameron Mackintosh, our producer, kept faith in ours when he asked us two years ago if we would write a new song for Ellen, 25 years after the creation of the show. We did enthusiastically. Such was the start of this reinvention of MISS SAIGON under his creative helm. We only hope that the little girl had a chance to reinvent her life.”

We hope that you are able to discover the story of MISS SAIGON here in Boston this June.